The Art of Ceramics in Vietnam

The Art of Ceramics in Vietnam

It is not by chance that the names of famous ceramic villages are ever-present in folk-songs and has such a strong meaning for Vietnamese people. Through the ages, motivated by their permanent desire to combine utility and refinement, and guided by a sure sense of aesthetics, Vietnamese potters have raised the craftsmanship of pottery to the level of an art. They have generated as many styles, techniques and motifs as there have been production centres, and given to Vietnamese pottery a unique charm that distinguishes it from any other style, either from China, Japan or Europe.


Because it marries together earth and fire, pottery represents, to a great extent, the spirit of Vietnam: a unique blend of tradition and creativity, of wisdom and passion, the image of a deep and natural ‘art de vivre’ where sensitivity meets pragmatism and the strength of togetherness is only balanced by an inalterable sense of individualism. Over centuries, five major styles of pottery have reached a stage of mature development: terracotta, brown earthenware, porous earthenware, white earthenware, and porcelain. 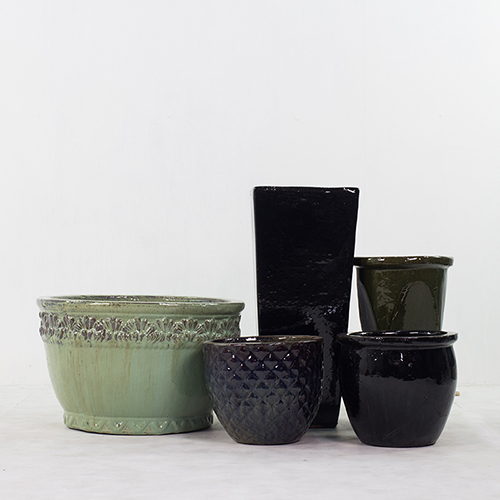 Right from the early days, between the end of the Hoa Binh culture and the beginning of the Bac Son civilization, beautiful terracotta items were already produced by skilled craftsmen. Objects were made of a thick and coarse paste of earth, mixed with sand and animal residue. They were usually moulded by hand and heated in a fire. Most of them were containers and cooking vessels. But it is with the Phung Nguyen, the Dong Dau and the Go Mun cultures in the North that Vietnamese ceramics gained their aesthetic. In Central Vietnam, it developed with the Dong Son and the Sa Huynh; and in the Southern part of the country, with the Cau Sat and the Oc Eo civilizations. From the 1st to the 9th century, as Vietnam fell under the domination of Chinese feudalistic rule, Vietnamese potters integrated the influence of Chinese masters to their own expertise. During the same period, white clay pottery had reached a rather advanced level of development in Thanh Hoa, just as brown pottery had done in Bac Ninh and terracotta in the Kingdom of the Champa. It is at this time that glazed or unglazed white clay used to make porous earthenware and brown earthenware appeared, as well as a new style of production: architectural pottery.

From the X th to the XIVth century, with the recovery of national independence, ceramic production reached a new level of quality, both in terms of technology, inspiration and craftsmanship. To serve the Imperial court and its wider networks as well as the common people, porous and glazed pottery gained in diversity and refinement. Popular articles included cylindrical jars, cooked rice containers, crockery, teapots and cups made of earthy brown, or elegant white pattern pottery. Celadon was also popular with its plain colour, as was brown or ivory-white glaze pottery. Fashionable decorative motifs depicted the beauty and abundance of nature: flowers, leaves and all kinds of animals such as birds and fishes. Potters were mastering complex techniques and knew how to use small-sized kilns, as well as kilns built inside mountains and hills. They were also operating king-sized kilns capable of firing at 1,200°C. This period also saw the creation of concentrated areas specialized in professional pottery in Thanh Hoa, Hanoi, Hai Duong and Ninh Binh where craftsmen were gathering to develop their trade and learn from each other. Through Van Don seaport products were exported to China, Indonesia, etc.


The period between the XVth to the XIXth century is characterized by very active production and diversification. Highly specialized pottery centres started to be established in Bat Trang (Hanoi) and Chu Dau (Hai Duong), their main production being porous earthen ware and blue pattern white earthenware, as well as coloured-glaze, three colours and cracked glaze ceramics. Similar centres were also producing brown and red unglazed earthen ware in Tho Ha (Bac Ninh) and Huong Canh (Vinh Phuc). Vast quantities of brown earthenware with eel coloured glaze from ash, mud or stone were coming out of busy kilns in Phu Lang (Bac Ninh), and the production of terracotta articles was flourishing in Dinh Trung, Hien Le (Vinh Phuc) and Van Dinh (Ha Tay). In technical terms, small-sized, king-sized and elevated kilns were used extensively with temperature, baking regime and fire adjustment under the total control of the potters. Glazing techniques using rice husk, tree ashes and stone were chiefly used, and the art of drawing under glaze as well as on glaze had reached maturity.


Since the beginning of the 20th century, alongside the traditional potters of Bat Trang, Tho Ha, Huong Canh, Phu Lang, etc, a number of modern production centres have established themselves and rapidly earned a good reputation on the market. Mong Cai pottery in Quang Ninh, Cay Mai in Sai Gon, Lai Thieu in Binh Duong or Bien Hoa in Dong Nai powerfully stimulated the trade with new products and increasingly diversified motifs. The 20th century also marked the appearance in Hai Duong of an item that was to greatly contribute to the value of the artistic treasure of Vietnamese ceramic: the first porcelain made of fine white clay and kaolin. 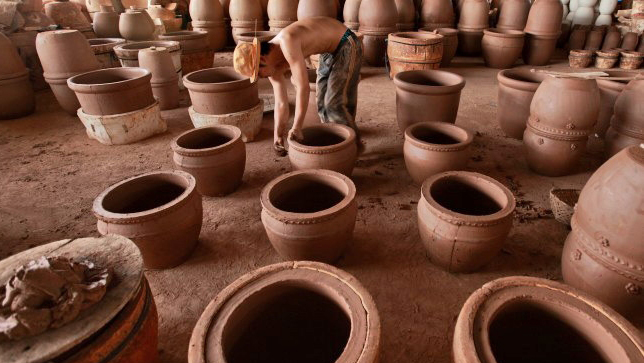 In recent years, Vietnamese ceramics have rapidly developed, both in terms of quantity as well as quality. The range of products available is increasingly growing in diversity, and craftsmen express their creativity in terms of shapes and decorative patterns in the production of items such as pots, jars that tell of the abundance of nature, elegant or plump flower vases with narrow or large mouth, bottles with necks of all sizes, tableware and house- ware - bowls and plates, cylindrical or flat and round tea pots, tiny cups, etc. Decorated pieces including decorated dishes, statues, animals and others, indoor and outdoor articles etc, are also contributing to the current success of Vietnamese ceramics and to the delight of its customers. In the 15th and 16th century, large quantities of Vietnamese pottery were imported by European and Asian countries, especially Japan, Southeast Asia and Western Asia. People can easily recognize the elegant beauty of Bat Trang ceramics, the strong and unique features of Phu Lang products, or the simple and minimalist in Cham’s. The combination between Earth, Water, and Fire, with Vietnam artisan souls has create an art which Vietnamese and people all around the world appreciate.

Our Ceramic Collection
Our Products 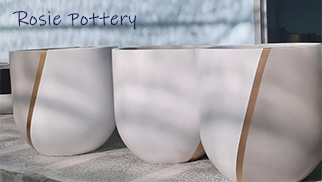 How the climate in South Vietnam affects the painted planter manufacturing and what we do to overcome!! 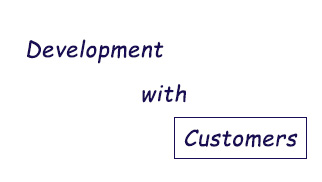 Together! We learn things along the way 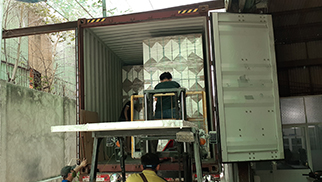